More Toilet Trivia, or The Outhouse of Knowledge! 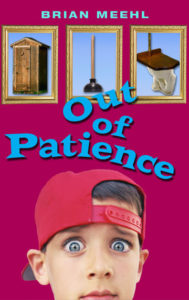 While I was able to squeeze a lot of toilet trivia and plumbing history into the book, I couldn’t fit it all. Here’s a few of Jim Waters’s “knowledge nuggets” that didn’t make it into the book, but certainly would have ended up in his American Toilet Museum.

My great-great grandfather, Thuisko Mühl, was a justice of the peace in Missouri in the late 1800s. After administering wedding vows to a bride and groom, he had a special way of introducing the newlyweds to the nitty-gritty of domestic life. He would take a clean chamber pot, fill it with beer, float a German sausage in it, and ask the happy couple to toast their marriage and take a sip. 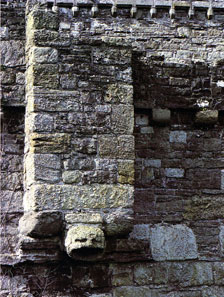 Castle moats were not just for defense:

Besides being an obstacle an enemy had to cross, water-filled moats also served as a castle’s sewer. Castles had rooms called garderobes which were small wardrobes for undressing, and relieving oneself. Garderobes were either built out from the castle wall, suspended over the moat, or built within the wall, and sluices sent the waste cascading into the moat. (At the Beaumaris castle in Wales, waste was discharged through the mouths of grimacing stone faces, like in the picture at left.) So, you could say a castle moat did double duty. While a wide moat was defensive, a stinky putrid moat was offensive too.

Where did the term “crapper” come from?

Back in the second half of the 19th century, Thomas Crapper & Co.s, Sanitary Specialties, was a leading plumbing supply company in London. He was considered “the Father of the Flush” after he invented the Valveless Water-Waste Preventer. By the early 1900s, the name “T. Crapper” could be seen on manhole covers, toilets, and urinals all over England. When World War I rolled around, the American soldiers, or doughboys, took the time to notice such things, especially when visiting public restrooms. So, when they returned home to America, one of the souvenirs they brought with them was a new word: the crapper.

In some plumbing circles, Mr. Crapper is still thought of so highly that the day of his death (January 17th, 1910) is celebrated as Thomas Crapper Day. In fact, if you’re ever in Martinsburg, West Virginia on January 17th be sure to stop by the V.E. Mauck Plumbing Supplies. They’ll be celebrating Thomas Crapper Day.

Why do the English call the bathroom the “Loo?”

Way back in merry ol’ England, when everyone used chamber pots, the Normans of France ruled the land and most everyone spoke French. If you spoke French, and were a courteous person, before you pitched the contents of your chamber pot out your bedroom window (day or night) you would yell, “Gardez l’eau!” In English that means “Watch out for the water!” Instead of pronouncing “l’eau” “low,” the chamber-pot-pitchers of England pronounced it “loo.” With the invention of toilets, the English dropped the habit of pitching piss out windows, but they didn’t drop the term “loo.” So, if you ever visit England, be thankful that their l’eau now stays in the loo.

More Latin in the loo:

Plumbum in Latin means lead. In Roman times, anyone who made things from lead was a “plumber.” Back then, “plumbers” not only made sewers and drains, but worked on roofs, gutters, and window frames. Also back then, the weight at the end of a string in a “plumb line” was made of lead. To this day, to get something straight and true is to “plumb it.”

But here’s the most important thing to remember about plumbum. The next time a plumber comes to your house and is taking a long time, don’t rush him. Remember, a plumber can never “get the lead out” of plumbing.

If you ever see a bee on a urinal know this:

Sometimes urinals (mostly in England) were adorned with a bee to give a gentleman a target so he wouldn’t splash his shoes. A bee was chosen as the target because “bee” in Latin is “apis.” If you take this pisser of a pun one step farther, does the men’s room become the “apiary?”

From Out of Patience, you might remember that the Roman god of toilets was Crepitus. But when it came to watching over Roman bathrooms, he wasn’t alone.

A brief history of the American bath:

It is believed that Ben Franklin imported the first bathtub to America from France in the 1700s. But one bathtub did not make America a nation of bathers. Americans turned their noses up at bathing for at least another century.