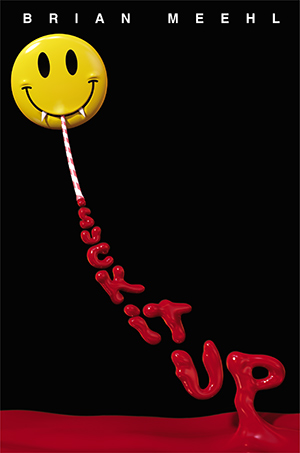 “Meehl’s contribution to the growing subgenre of YA vampire novels is very, very funny—similar to M.T. Anderson’s Thirsty, but less twisted and heavier on the humor. Morning McCobb, a recent graduate of the IV (International Vampire) League, is the vampire as superhero, geek and lonely boy all rolled into one. His first postgraduation assignment is to tell the world that yes, vampires do exist. Becoming the first out—and therefore most famous—vampire isn’t easy (cue the media frenzy). Being around this unlikely heartbreaker is difficult, too, as Portia Dredful finds out when her PR agent mom’s highest-profile client moves in with them. The author is especially clever with names (Penny Dredful, Merder Sink), his prose engaging, smart and fast-paced. Witty one-liners pile up while Meehl exploits every known vampire cliché to great comic effect (Morning not only refuses human blood, he’s vegan, subsisting on a protein blood substitute called Blood Lite made from soy). A refreshing take on the brooding vampire romance, with a misfit vampire protagonist readers are certain to love.”  –Publisher’s Weekly
“Dracula smoothly transformed into a bat. Buffy targeted the undead to drive home a point, and now thousands of girls yearn for Edward, Stephanie Meyer’s gorgeous and immortal protagonist in her Twilight books. So, what can Brian Meehl add? The veteran writer brings a delightful twist to Suck It Up.  The novel’s final 100 pages plunge into a tense life-or-death struggle, and the action-packed showdown is video-game-worthy.” –The Cleveland Plain Dealer

“Not quite as dark as most vampire stories, Meehl’s story is filled with humor, quirky characters, light romance, …and a lot of fun.”
–School Library Journal

Genesis
More IVL Webpages
Research
Brian Reads: The author reads “How to See a Vampire” and “The First Clumsy Kiss” from the book.