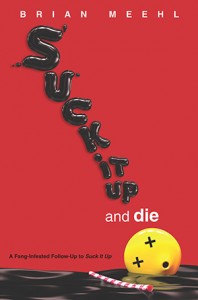 Sequels generally owe their origins to the first book, right? Well, that’s the case with Suck It Up and Die. But I’ll tell you about two other things that got this story going.

One, I planted the seed (literally) of a sequel at the end of Suck It Up when, just before DeThanatos is buried as a Bristlecone pine seedpod in the White Mountains, he pricks Portia and absorbs a drop of her blood.

The other thing that kick-started it was my editor saying, “Hey, how ’bout writing a sequel?” Some editors don’t take no for an answer.

Besides my reading on vampires for Suck It Up, a trip to The Ancient Bristlecone Pine Forest in California’s Inyo National Forest, and feasting on the environs of New York City, Suck It Up and Die required sinking my teeth into additional bloodcurdling subjects, from a book about “janitors” who clean up crime scenes (Mop Men) to one about creatures who have mastered the art of involuntary blood donation (Dark Banquet). Of course, I read many fictional vampires books as well, from Bunnicula to Undead and Unwed.

Here are some of the books I read to fuel my brain about blood, blood drinkers, and vampires.